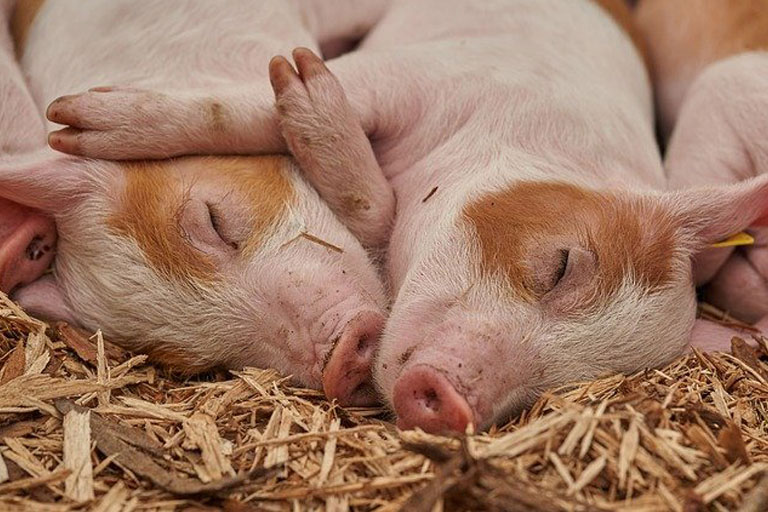 Posted at 16:15h in Technical articles by nuevoadmin

Newly weaned piglets suffer from post weaning diarrhea in the main because of the immature development of the gut and their inadequate capacity to digest a “vegetable based” diet. Reduced feed intake, as a result of weaning -a very stressful procedure- could then lead to gut damage which includes reduced villus height (height is impaired because of low feed intake, infection and stress) and increased crypt depth. This in turn will increase undigested feed reaching the hind gut which then acts as an ideal substrate for bacteria growth (e.g. E. coli) and cultivates the disturbance of the colonization resistance of the gut.

Nutrition of newly weaned piglets remains a key challenge for all involved in swine production, as a good start in the post-weaning period will have great influence to the subsequent survival, development and growth rate of pigs through to market. Nowadays, every feeding/nutritional program aims to a smooth transition from the first age, high cost/high palatability diet to a relatively less expensive second age diet-based on vegetable proteins- but while associated with a significant intake. It is also a fact, that even today with the plethora of nonantibiotic additives available and much improved genetics, weaning pigs’ diets are still often based on the inclusion of both antibiotics and ZnO to tackle watery faeces and/or diarrhea.

However, this ‘status quo’ needs to change -and is changing- and without any doubt there is a need to identify and apply alternative strategies to enable pigs handle the post-weaning metabolic disorders more effectively.

Most pathogenic bacteria will use undigested protein for proliferation and growth and as such a reasonable reduction in diets’ crude protein makes sense as critical point to help control post weaning diarrhea. At the same time, increasing availability of crystalline AA changed the way we can best deal with the protein nutrition issues of piglets. So, from a formulation point of view we can efficiently move from a dietary crude protein-based diet to an essential AA-based diet without negatively affecting piglets’ performance and indeed improving it!

Formulating to an ideal AA profile balance must be taken for granted. Lysine and Methionine are invariably key but special note should also be given to Threonine as its role on protein synthesis is indisputable but of equal importance is also its involvement in gut health maintenance as particularly during immune challenges, the dietary supply of Threonine plays a key role in modulating the immune function through its direct impact on immunoglobulin’s synthesis. Valine which is the 5th limiting amino acid, must also be taken good care of as according to latest scientific evidence drives both feed intake and feed conversion rate.

Diets rich in animal origin protein sources should also be checked for their AA profile as Valine, Isoleucine and Leucine belong to the Branched Chain Amino Acids (BCAA) group and a Leucine excess (high animal products inclusion in the diet) together with a Valine/Isoleucine deficiency could be detrimental to piglet performance.

High buffering capacity diets lead to lower digestibility of organic matter and crude protein and therefore adversely affect the performance of the piglets. Simultaneously, high values of diet buffering capacity have a significant effect on enhancing intestinal fermentation occurring in the ileum and caecum where fermentable energy is the limiting factor to bacterial growth. This will result in increased proteolysis and in turn increases in amines and ammonia release, end products which are toxic and leading to diarrhea. The result been poor growth and sick piglets!

Remember, the final feed buffering capacity value is also heavily depended on the sources and supply of minerals and proteins and as such low Ca, P and protein levels for the first 2 weeks post weaning would limit problems and boost performance.

Bearing in mind the above, any adaptation to minerals and protein levels -in order to reduce buffering capacity- should be done through a responsible raw material selection. Partial or total replacement of limestone with calcium formate and the parallel use of monocalcium phosphate instead of dicalcium phosphate will lead to increased feed cost but it will effectively reduce the feed buffering capacity.

Similarly with protein levels, aim for 18-18.5% but ensure that SID Lys levels are at minimum 12-13 gr/Kg and all other essential AA are well balanced.

In every case, take care and do not blindly reject high value raw materials simply based on their -for example- high protein content and apparently high buffering capacity.  Instead carefully formulate based on the goal; first to prepare the digestive tract of the piglet for the up-coming high growth and then push for high intakes.

Intestine track changes significantly at the weaning period and as such is influencing both piglet’s health and feeds digestibility and utilization. Hazardous bacteria reproduction and proliferation are depend on several factors including temperature, moisture and pH. Bacteria prefer close to neutral pH values to grow and as such their activity can be restricted by using different antimicrobial ‘orientated’ organic acids.

Organic acids have a bactericidal activity by interfere to the bacterial metabolism as they have direct impact on increasing acidity of the gut. Their ability to change from the undissociated to the dissociated form -depending on the environmental pH- makes them effective antimicrobial agents. When an acid is in the undissociated form it can diffuse through the membrane of bacteria into their cell. Once they penetrate into the cell, acids will continue to decrease internal pH. Bacteria cells must pump out the protons in order to maintain internal homeostasis and enzymatic process will stop or slow down resulting in cell metabolism failure or death.

MCFAs are fatty acids which are extracted from coconut and palm oil. Their mode of action is similar to organic acids as they have a similar effect on bacteria proliferation.  Due to their cellular structure, MCFA can easily be absorbed and metabolized four times quicker comparing to the long chain fatty acids. This makes them extremely efficient -in terms of energy supply- especially in young piglets where their digestive system is not fully developed and as such, they are unable to meet their energy requirements.

In parallel, MCFAs are characterized by a strong antimicrobial activity which is due to their ability to penetrate the cell-intruder and brake down its cell wall and membranes. As already mentioned, MCFA positively influence the intestinal environment and gut microflora and in this way they can be considered as one of the strategies which can be applied to reduce ZnO and/or antibiotics.

Phytate (the main form of Phosphorus found in plants) is very much an anti-nutrient in terms of reducing the mineral bioavailability but also in recent years there has been research confirming the negative impact that phytate has on protein/amino acid and energy utilization by the animal.

Phytate has the ability to make proteins insoluble and the reduced protein solubility results in an increased production of HCl, pepsin, mucin, and sodium bicarbonate (NaHCO3) resulting in an increased energy maintenance and endogenous amino acid loss.

Breaking down phytate as fast as possible with the addition of phytases at high levels (superdosing) would be therefore expected to have beneficial effects in animals performance both by improving amino acids utilization (specifically those associated with mucin and pancreatic secretions such as glycine, serine, threonine and proline) and improved energy metabolism either from direct (improved digestibility and solubility of dietary nutrients) or indirect (reduced endogenous losses) actions.

To summarize and whilst not making any reference to other obvious, critical factors like management, overall health status, genetics  etc. it is important to stress that recent scientific research and trials indicate that high feed intakes -from the very early days of a piglets’ life- will help them to best digest and utilize nutrients like protein and starch more effectively, leading to the desired high growth rates. On the contrary, low feed intake after weaning can be detrimental for health as well as growth performance.