Posted at 17:30h in Technical articles by nuevoadmin

Feeding lactating sows is a task that requires daily attention to meet increasing needs for milk production throughout the lactating period.

In almost every pig farm I visit, lactation feeding management is a reference point that I try to discuss in detail with the personnel of the unit. After countless field trips, it is clear to me now that although lactation length can be quite similar among different farms, there is still a large variation in litter weaning weight; and it appears this is mainly due to the way farms manage lactation feeding.

Nowadays, ensuring profitability depends strongly on the sow’s milking ability and by inference on her nutrition: the level of individual nutrient intake and on total feed consumption. In parallel, the last decade’s improvement in genetics is one more challenging factor to consider when it comes to increasing milk yield.

In contrast to the practices of previous years, feeding patterns that were based in restricted feeding, mainly during the first week after birth, are no longer applicable as much scientific evidence suggests a negative impact on total milk production.

So when it comes to feeding the modern sow, the main principle is to start with at least the same amount of feed given in the last days of gestation (exactly after parturition) and then try to increase daily feed consumption by at least 0.5 kg of feed, or ideally by 1 kg, especially for the sows that are in the desired body condition.

In extend to the above, there are data from field trials demonstrating that feeding the sows more aggressively (offered full feed on demand) from day one, compared to restricted-fed sows provides significantly better overall performance in terms of feed intake, weight loss, reproductive performance and litter performance (Table 1).

To achieve a feed consumption of 7-8 Kg per day — especially in hot climates — it is crucial to increase feeding frequency. The strategy should be to feed the lactating sow smaller meals, and not necessary of equal quantities, throughout the day. Even better is to provide the larger amounts of feed either early in the morning or late at night when the environment is cooler, which therefore helps to prevent the sow’s body temperature to increase due to feed digestion and metabolism.

An additional advantage of switching from the standard two to three meals per day (which is also supported from plenty of practical evidence) is that as the sows will end up eating more feed, they will have a higher milk yield to support better piglet growth.

In commercial pig production systems, the lactating sow is usually unable to consume sufficient feed and therefore a negative energy balance is the result. This in turn will generate the mobilization of body reserves, and under certain conditions will end in reduced piglet weight growth.

To avoid this situation, a typical lactating diet should contain concentrated raw materials (in terms of energy) such as cereal grains, and at the same time, be rather rich in fat and oils (vegetable and/or animal origin) to help the sow meet both her own maintenance needs and those of milk production. Ingredients high in fiber should be used cautiously. They will help avoid constipation due to their tendency to reduce feed intake and therefore total nutrient intake, but the latter will be a problem in itself, hence the caution. Depending on the sow’s parity, body weight, milk production, and of course body weight loss, differences may occur in energy requirements of individual sows. But, a commercial high-energy lactation diet (>10 MJ NE) should prove adequate in covering the sow’s energy needs under most commercial conditions.

Amino acids.  A number of essential amino acids play an important role in milk production, but undoubtedly, the high concentration of lysine in the sow’s milk is a clear indication of the importance and need of adequate dietary supplementation of this specific and first limiting amino acid. The requirements for dietary lysine increase as milk production gets higher, and this needs to be taken into account from a formulating point of view, especially when referring to first lactation sows of modern high prolific genetics.

Regarding the other essential amino acids, these are related to digestible lysine levels at a percentage ratio of 55-66-18-82 for methionine+cystine, threonine, tryptophane and valine, respectively. Special note should be given to valine, which seems to be a “key” factor in large litters, even though this needs to be further investigated. Either way, the ratio of valine/lysine appears to be a limiting factor for the use of synthetic amino acids, and this is often a point of disagreement between nutritionists.

In conclusion, maximizing nutrient intake during lactation is definitely a determinant factor for ideal growth and in that direction a successful farrowing management scheme could be summarized simply as “the more feed intake the better.” 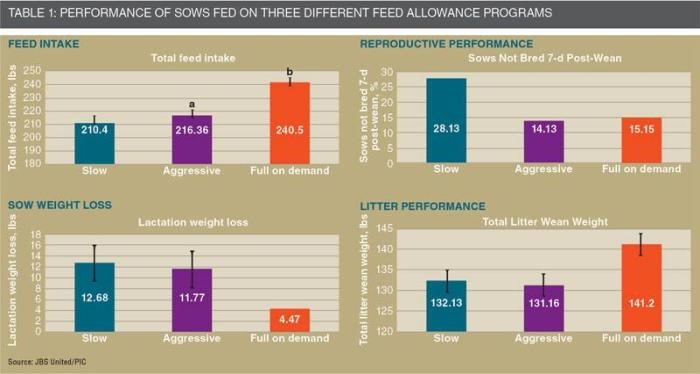 Full-fed sows (on demand) appear to consume more feed, but this is translated to higher milk yield and heavier piglets without sacrificing future sow performance.