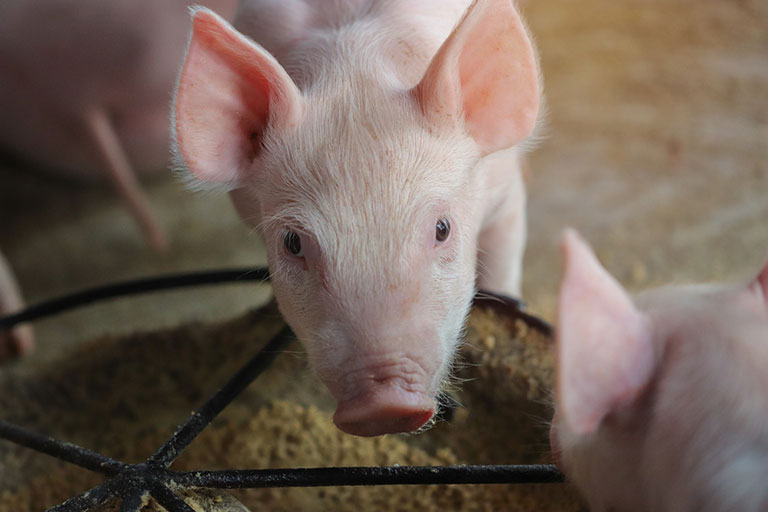 Posted at 17:23h in Technical articles by nuevoadmin

New requirements mandate that sows and gilts must be fed diets rich in fiber and contain sufficient energy to meet their needs.

In recent years, the global pig industry is increasingly confronted with the earnest desire of retailers and consumers to know not only the origin of pork meat and products, but also the living conditions of the animals.

The need to satisfy this requirement has already led to chain reactions and significant changes at official state regulations, within and outside the European Union, and at the farm level, in terms of buildings and facilities specifications as well as stock management and lately nutrient specifications and feed management procedures.

Most of the changes relating to building installations issues are focusing on space allocation (requirements for more space per pig reared), to the need for increased movement (for sows during gestation where the European legislation states that all females should be grouped in pens, not in individual crates from the 4th week after artificial insemination until entering the farrowing house). And finally, to the need for more clean air which in practice often translates to reducing the number of pigs per room, unless air circulation systems are updated (at a significant cost).

Regarding stock management, the main issue is the call for change in pig castration method. According to new European legislation this is still permitted without anesthesia only in piglets at 7 days of age or younger, and then it is restricted to only by qualified staff or a veterinarian. For piglets older than 7 days, castration can only be performed with anesthesia and then prolonged analgesia and always with the mandatory presence of a veterinarian.

At a nutritional level, which is considered the novel addition to the welfare portfolio, particular emphasis is currently given to the diet for gestation sows and gilts. Sows and gilts must be fed diets rich in fiber and contain sufficient energy to meet their needs. The above specifications are considered to satisfy both the satiety of sows and their innate need to chew (fiber), and the energy needs of the animal for maintenance and embryo development and ensuring a successful and healthy pregnancy.

An example of legislation on this matter is offered by the Dutch state, where the minimum concentration of crude fiber in gestation feeds should be 140 g/Kg, and for non-starch polysaccharides this level is placed at 340 g/K. Nevertheless, whether this fiber-rich is easily achievable through the available raw materials, while also considering the energy requirements of modern genetics, is a question that will need to be answered by nutritionists.

Under commercial conditions and from a formulating point of view, raw materials that are rich in crude fiber (such as sugar beet pulp, wheat bran, soybean hulls and sunflower meal) are ideal ingredients for arriving at a gestation sow “‘welfare” diet. But, even so it is often very difficult (if not impossible) for the crude fiber concentration of the final feed to reach such high levels, while containing all other appropriate nutrients extending from protein and amino acids to minerals, vitamins, and fat.

In particular, such a formulation will often lead to pig feeds with very large volume which will satisfy the hunger of sow but will also require significant addition of energy-rich ingredients (such as soybean oil and vegetable or animal fats). The new “architecture” of these diets will most likely be such that such inclusions will often prove very costly. Here, of course, one needs to take into account the extra expense of dispensing with the increased volume of manure, inherent in any high-fiber nutrition program!

Apart from the strict application of the legislation, issues such as the effectiveness of diets that have been designed in full accord to these legal specifications need to be considered and be answered before presenting such a diet in front of a pregnant sow. So, let’s assume that the cost of the final feed is not the determining factor that affects formulation. Then, how effective in terms of performance is a diet with such high crude fiber content? One major problem will arise at the transitional period during when the gestation ”welfare diet” is changed to the lactation diet.

Here, the difference in crude fiber content between the two diets will be unavoidable and difficult for the animal to manage in the short period of a few days or even hours between transfer to the farrowing house and birth time. One solution would be to increase the crude fiber in the lactation feed (so that the transition from one feed to the other is as smooth as possible), but this would compromise daily feed intake in lactating sows.

This depressed nutrient ingestion will reduce milk production and piglet growth rate at the most critical of times. Another approach will be to add a third diet between the dry and lactation feeds but this is beyond the logistics means of most commercial farms, at least at the present.

An alternative approach advocated by some nutritionists is instead of formulating on crude fiber levels, formulate instead on a non-starch polysaccharide base. This will help reduce bulkiness and the associated need for supplemental oils or fats, because sows will get significant amounts of energy through fermentation of the non-starch polysaccharides in the large intestine. Of course, in such case, an adjustment of the essential amino acid ratios in the diet would be necessary to meet the maintenance and pregnancy requirements for protein.

In conclusion, the adjustment to the new reality and the changes required will mean significant changes to modern pig production practices. These legislated adjustments often require large investments that are often impossible to justify financially. On the other hand, even in the current economic crisis, the fact is that retailers and consumers continue to express their preferences lead many to argue that for pig producers there is only one path to follow.